The Roundtable (25/03/2022), chaired by Gitta Vanpeborgh, Belgian Federal Deputy, was well-attended with strong engagement from participants. Hanne Sanders, Adviser on Wellbeing and Safety at Work to Cabinet of the Deputy Prime Minister and Ministry of the Economy and Labour spoke about the importance of the issues being discussed at the roundtable, progress that has been made in Europe and reaffirmed the support of the Minister and the Belgian government for preventing exposure to hazardous medicinal products (HMPs) and other substances.

The first session of the roundtable gave an overview of the need to prevent exposure to HMPs and other substances in Belgium. France Duvivier, Vice President of the Belgian Oncology Pharmacist Practitioners (BOPP) and head of Oncology Pharmacy at CHR Verviers, gave the first presentation. Ms Duvivier highlighted the results of a survey of Belgian pharmacists conducted by BOPP in 2020 and spoke about some of the most pressing issues when it comes to preventing exposure to HMPs. She concluded with recommendations which included the ‘need to establish a complete and regularly updated list of cytotoxic/hazardous drugs’ and to ‘encourage or mandate the use of a secure/closed system for the preparation and administration of cytotoxic treatments.’

The second presentation of the session was given by Daniel Schuermans, Vice President of the Belgian Association of Nurses (AUVB-UGIB-AKVB). Mr Schuermans spoke about the changes to the European Directive 2004/37/EC on the protection of workers, and training in particular, against the risks related to exposure to carcinogens or mutagens at work and what this looks like in practice in Belgium.

The next session of the roundtable provided attendees with a summary of the legislative changes in the revised Carcinogens, Mutagens and Reprotoxins Directive and the development of guidelines by the European Commission on the handling of HMPs and a definition and list of HMPs. Emilie Marquis-Samari, Counsellor for Social Affairs at the French EU Representative Office in Brussels, spoke first. Ms Marquis-Samari began by summarising the agreement reached between the European Council and Parliament which includes 4 main changes:

She explained that the current French Presidency of the European Union has already shown itself ready to open the debate on the current procedures for preventing occupational exposure.  These may prove to take a particularly long time and not in line with the urgency and expectations of those wanting to protect workers’ health.  Ms Marquis-Samari informed attendees that cancer is still the leading cause of death at work and pledged that the French Presidency would work hard to reduce the number and protect workers.

Ian Lindsley, Secretary of the European Biosafety Network, followed with a presentation which provided attendees with further detail on the changes in the CMRD, the work of ANSES in France on a list of HMPs and the existing European Commission guidelines on the handling of HMPs. Mr Lindsley then spoke about the next steps of the process – notably the development and publication of EU guidelines by the end of 2022, although it was noted that this is a particularly optimistic timeline. The presentation concluded with a call to action for those in attendance; healthcare systems in Europe and Belgium need to be prepared to transpose and meet the new and existing requirements of the CMRD in relation to how they manage HMPs now and in the future to protect healthcare workers from occupational exposure and its health impacts, including cancer and miscarriages.

The next session examined the current situation on prevention of occupational exposure and the development of a consensus document in Belgium and the need to prepare to transpose and implement the new CMRD and input to guidance on handling HMPs and a definition and list of HMPs. The first presentation of the session was given by Eline Versheure, Medical Faculty at KU Leuven, and provided an overview of the unintended exposure to antineoplastic agents in a Belgian context. Ms Versheure highlighted why healthcare staff are exposed through dermal contact by touching surfaces and objects contaminated with cytostatic drugs or by preparing and administering them. The informative presentation identified that, despite the Code on Wellbeing at Work including the Royal Decree of 11 March 2002, there are still evident risks. Therefore, the involvement of a prevention advisor is important, especially in new situations, when using new instruments or introducing new employees.

The second presentation of the session came from Marijke Quaghebeur, Clinical Nurse Specialist at UZ Gent, and went into great detail about the root location of contamination spread. Ms Quaghebeur identified the door handle of the bathroom, the toilet seat and the infusion pump/stand as areas most often contaminated. The importance of regular and updated training for staff around the threat of encountering cytostatic substances was stressed. Staff must protect their skin well and always apply good hand hygiene to reduce risk.

France Duvivier raised a frustration that often substances are contaminated before they arrive at hospitals and other healthcare facilities. She asked the question as to why this is still the case and was disappointed that staff continued to be put at risk. Training is crucial in the current situation but it should not have to be.

The final speaker in the session was Birgit Tans, pharmacist from UZ Leuven, said that every healthcare worker will come into contact with hazardous drugs at some point in their career. But not everyone is aware of the risks involved. Good staff training is crucial. Before and during their career, they must be trained, both in the hospital pharmacy, in the care services, with the doctors, in the services of the establishment and also in home care. The use of appropriate protective equipment is also necessary to avoid exposure to these products as much as possible.

Ms Vanpeborgh went on to thank the organisers of the roundtable, the speakers and all those in attendance. She pledged to carry on advocating for the issues raised in the meeting and will share the consensus document with the relevant ministers in labour and health. She also thanked healthcare staff, saying “caregivers are on the front line every day. They did it during the Coronavirus crisis, but they still do it, day after day. We need to make sure our caregivers are well protected. We need to take care of our caregivers.”

Ms Sanders acknowledged the importance of preventing exposure to HMPs and other substances and made clear that the Ministry fully supports prevention. Mr Lindsley thanked Ms Vanpeborgh for chairing and praised the Belgian approach to the issue of HMPs. The roundtable was then brought to a close by Ms Vanpeborgh and attendees were given an opportunity to network after the event. 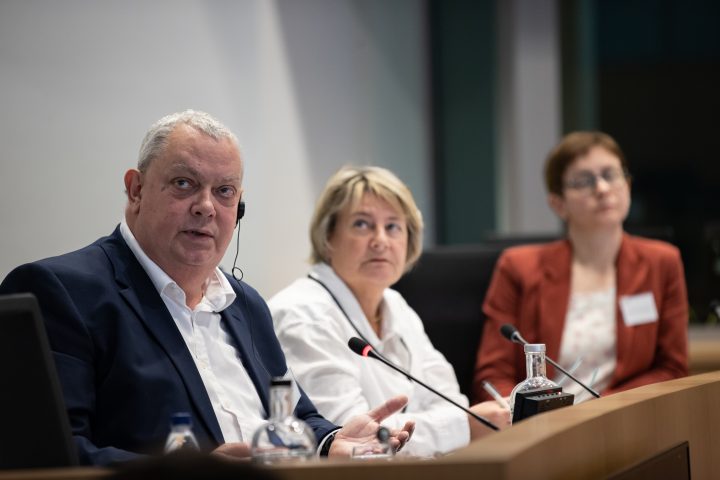