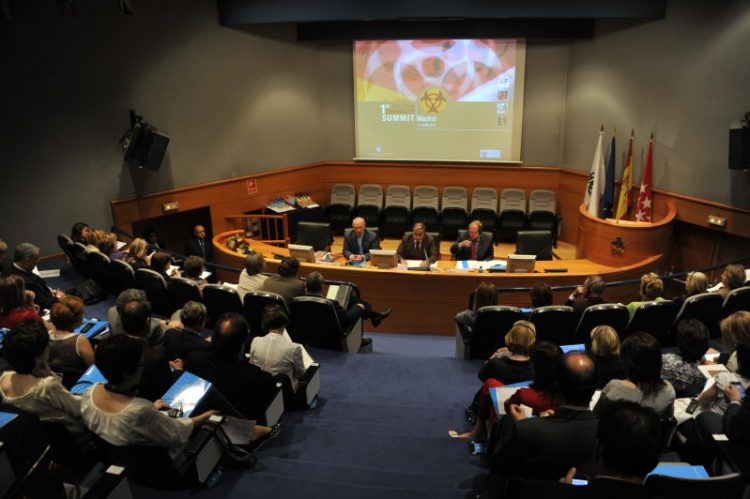 The Network hosted the 1st European Biosafety Summit in Madrid between 1-2 June 2010 which coincided with the publication of the European Directive in the Official European Journal on 1 June.

The European Biosafety Summit was convened following the final adoption of the new European Directive on preventing sharps injuries, with a key commitment to improve the safety of patients and healthcare and non-healthcare workers who are at risk of injury from used needles and other medical sharps, which can lead to potentially fatal infections such as HIV and hepatitis B and C.

The European Biosafety Summit welcomed and celebrated the publication of the EU Sharps Directive in the Official Journal of the European Union on 1 June 2010. The Directive was drafted by the European Commission and adopted by the European Council of Ministers. It incorporates the EU Framework Agreement on sharps injuries, negotiated by the EU social partners EPSU and HOSPEEM, and also responds to a European Parliament report on needlestick injuries.

The Summit gave recognition to all those involved in this key achievement including; the important work carried out by the EU social partners, EPSU and HOSPEEM, in negotiating the EU Framework Agreement; the European Commission; European Council of Ministers; Members of the European Parliament; trade unions, associations, organisations, agencies and key academics on this issue. The Summit outlined its unreserved appreciation to all those involved for their years of tireless work and commitment to the prevention and elimination of sharps injuries.

The Summit recognised that the EU Sharps Directive was a key step forward in the prevention of sharps injuries, but also noted that the “real work” begins now, in the effective implementation and transposition of the Directive within the Member States.

The Summit was addressed by leading academics and key stakeholder organisations who presented empirical data. It was clearly outlined that to achieve effective implementation of the Directive and its aims, an integrated approach is key:

Broadening out implementation – protecting all vulnerable workers and patients

The Summit noted that solidarity for all vulnerable workers must be shown. It was discussed that at-risk occupational groups not included within the scope of the Directive must also be protected, along with workers and patients outside of the European Union.

The Summit in Madrid marked the creation of the European Biosafety Network, with the principal objectives of preventing and eliminating sharps injuries and early legislative implementation of the Directive. The Summit committed to:

The following documents were distributed at the Biosafety Summit, and are also available to download here.