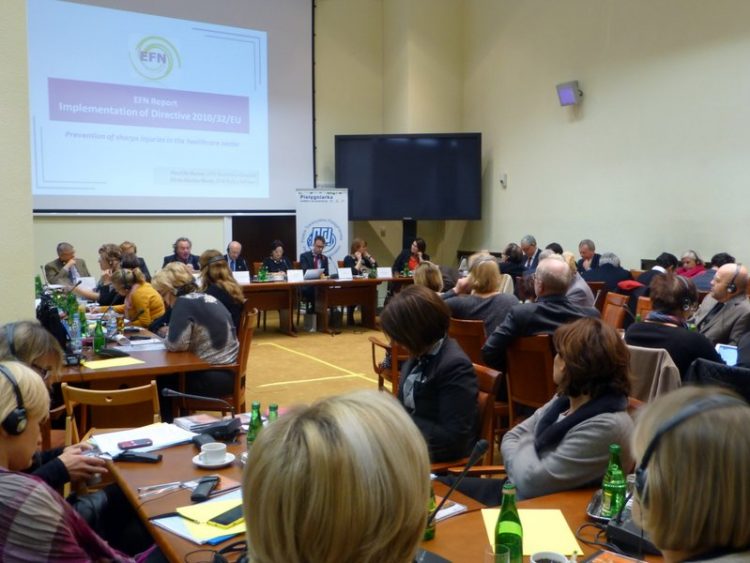 The Summit was held 6 months after the deadline for Member States to transpose and implement the EU Council Directive on prevention of Sharps injuries in the hospital and health care sector.

A keynote address by Aleksander Soplinski, the Polish Vice-Minister of Health, welcomed the Summit to Poland and highlighted the importance and great work undertaken by all the organisations. He noted that the Directive was a significant milestone in the safety of healthcare professionals.

Prof. Dr Máximo A. González Jurado gave a presentation on the main findings of a legal analysis undertaken by Spanish Lawyer Dr. Rafeal Pellicer. It revealed that none of the eleven countries examined have fully transposed the Directive in all countries analysed, other than Germany and Netherlands, the existence of a penalty system has not been implemented. Furthermore six countries have not used a legal instrument that grants a full guarantee for transposition of the Directive.

Following this presentation Gail Adams from UNISON called for the Directive to be extended to non-health care areas such as roadside cleaners as they are in just as much danger from sharps injuries as the healthcare profession.

Dr. Paul De Raeve, EFN Secretary General, also presented the findings of an EFN questionnaire on the practical implementation of the Directive in the workplace in the various Member States. The feedback from almost 7,000 respondents across Europe suggests that in the workplace the majority of nurses are seeing some positive progress towards meeting the requirements of the Directive but a lack of an explicit ban on recapping, lack of risk assessments, access to safety devices and lack of education and awareness raising are still major problems that need to be addressed. As a result, he advocated a policy of zero tolerance to help protect healthcare professionals in the workplace.

Jon Skewes from the Royal College of Midwives noted that the picture of nurses did not differ much from Midwives and warmly welcomed the Directive and supported the need for change identified by the EFN questionnaire. Dr. Paul Grime from the Safer Needles Network welcomed and advocated the zero tolerance policy and highlighted the vital importance of using sharps needles by citing examples of past needlestick injuries.

Francisco Alvarez from the European Commission informed the Summit of the work carried out by the Commission on monitoring the level of transposition and compliance with the Directive. He outlined that it could take up to several years to analyse and that there are currently 5 open cases of member states that have not yet fully transposed and complied with the Directive; Austria, Cyprus, Italy, Ireland and Luxembourg.

Stefan Lundberg from the Swedish Association of Health Professionals and Elizabeth Adams, Irish Nurses Medical and Midwife Organisation discussed how different member states have complied with the Directive. The successful compliance in Sweden was due to merging the Directive with an additional new law and by translating the text of the Directive into Swedish law word by word, whereas the lack of compliance in Ireland was due to political issues rather than a lack of will.

The Summit was a great success and in conclusion, although great strides have been made, there is still work to be done. Prof. Dr Máximo A. González Jurado was delighted to announce that there will be a 5th European Biosafety Summit on 2nd June 2014.